By MAGGIE HABERMAN, POLITICO – Hillary Clinton told a packed auditorium of New York University students Thursday that the most important tip she could offer women in public life was a lesson she took from one of her role models, Eleanor Roosevelt: “Grow skin like a rhinoceros.”

“When you look at the challenges of being a change-maker and being willing to buck the establishment, it’s important to learn how to take criticism seriously but not personally, and to do that you have to be willing to hear what others who are your critics are saying and to evaluate where they are coming from,” Clinton said at an event for her family foundation’s “No Ceilings” project.

The appearance kicked off a partnership between her family’s foundation and the Bill & Melinda Gates Foundation. The former secretary of state and potential 2016 presidential candidate was quizzed along with Melinda Gates for an hour by her daughter, Chelsea, before a crowd of students who turned out in a near-blizzard.

“We’re still developing what are acceptable styles of leadership for women,” said Clinton, who downplayed a gender-based appeal in her 2008 presidential campaign, but who has spent decades working on issues related to women’s participation in society.

Clinton, long a magnet for criticism, said the Roosevelt lesson was important, but so was the notion of women being true to themselves in public life, “without it making you less authentic or undermining your confidence, and that is not an easy task.”

Clinton pointed to her time as secretary of state as the inaugural work on the No Ceilings project. Clinton, who’s widely seen as a likely presidential candidate in 2016, has the potential to make history as the United States’ first female commander in chief.

She’s made No Ceilings her cornerstone effort at her family’s foundation, recently hiring Nancy Pelosi’s former chief of staff and Tory Burch Foundation executive Terri McCullough to spearhead the project.

Clinton and Melinda Gates both focused on the need for men to voice and promote confidence in their daughters equal to the type of pride they exhibit about their sons.

And Clinton said that young women, particularly at middle-school age, tend to lose confidence in themselves and have trouble working through the negative “voices in their head.” 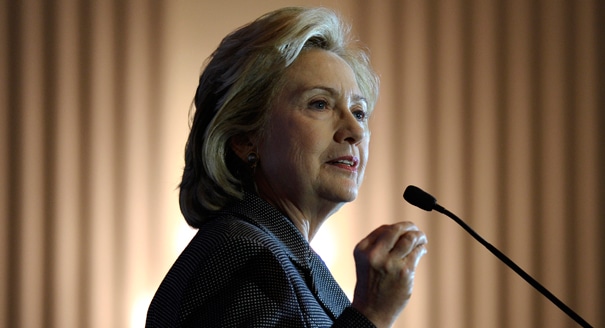