Hillary Clinton returns to campaign trail, stumping for someone else — for now

NBC/MSNBC – FALLS CHURCH, Va. — Officially, the concert hall billed it as a Terry McAuliffe campaign event. But the northern Virginia crowd came to see Hillary Clinton, potential 2016 presidential candidate, and they greeted her like the headliner.

“The leader who has joined us here today–” was as far as McAuliffe, the Democratic candidate for Virginia governor, got before the crowd leapt to its feet, almost everyone holding cell phones aloft, trying to snap a picture.

“HILL-A-RY! HILL-A-RY!” they chanted, before McAuliffe even said her name. (The chant had surfaced briefly earlier, when a Democratic operative standing in the back jokingly grumbled, “Let’s get on message here, people: TER-RY, TER-RY.”)

She gave her fans a nearly 20-minute speech that wasn’t just an endorsement of her old friend. It was an outline of a standard campaign speech that set her up against the policies of a Republican Party that’s largely taking the blame for a 16-day government shutdown and near default.

“In Washington, unfortunately, we’ve seen examples of the wrong kind of leadership. When politicians choose scorched earth over common ground, they operate in what I call the evidence-free zone,” she said, prompting cheers from the crowd of over 600 in the State Theatre here. “With ideology trumping everything else, we’ve seen that families in Virginia and across the country have felt the consequences.”

via Hillary Clinton returns to campaign trail, stumping for someone else — for now – NBC Politics. 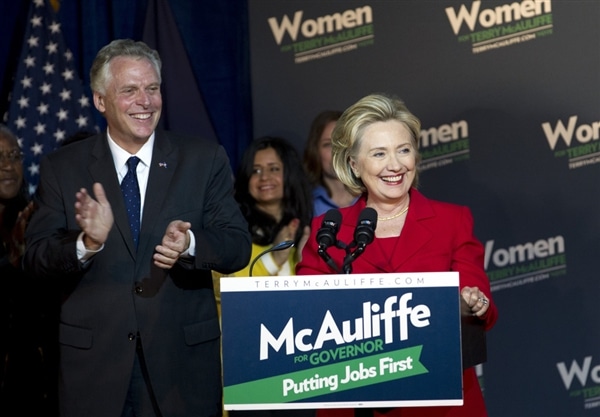