By MAGGIE HABERMAN for POLITICO – Republicans in search of an attack line against Hillary Clinton have begun to cast her as a tired relic of the past — an implicit contrast to their own bench of up-and-comers like hip hop-listening Marco Rubio and libertarian-leaning Rand Paul.

But Democrats are confident that giving voters the chance to make history by electing the first female president — by definition a forward-looking act — would trump any argument that Clinton is too 20th century and give her a “change” mantra of her own.

“If Secretary Clinton runs, she’ll be the nominee — the first female nominee of either party,” said Stephanie Cutter, a former top adviser to the Obama White House and campaign. “That breaks through the ‘old’ tagline that the Republican geniuses are cooking up because, if handled correctly, women of all ages will absolutely be inspired by that. I don’t recommend that be the totality of her message or platform, but there’s no way to hide that fact and it certainly shouldn’t be discounted. “

It’s the type of “first” campaign that was a hallmark of the Barack Obama 2008 effort, even if he didn’t overtly run that way. Clinton ran a campaign that was focused primarily on experience and strength in 2008, after the pollster for her poll-driven campaign found that her gender could hurt more than help.

There’s no question that one of Clinton’s challenges in 2016 would be demonstrating that her candidacy is about the future and not a bygone era. Her husband ran two decades ago at age 46 as a turn-the-page change agent — famously using Fleetwood Mac’s “Don’t Stop (Thinking About Tomorrow)” as his campaign theme song against 68-year-old George H.W. Bush, in case the generational contrast wasn’t obvious already.

Early attempts by a handful of Republicans to portray Clinton as a figure of the past are not solely about underscoring her age — she will be 69 on Election Day 2016 — but the fact that national elections are always framed as choices between moving forward or looking back. 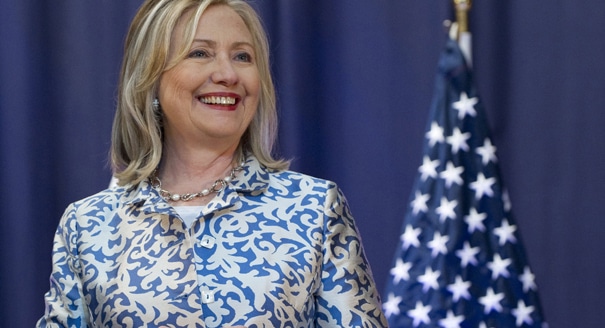