A Bet on Clinton – If They Network, She Will Run

By NICHOLAS CONFESSORE, New York Times -A new group dedicated to paving the way for a Hillary Clinton campaign in 2016 has already recruited dozens of the Democratic Party’s elite donors and bundlers, effectively kicking off the presidential money hunt more than three years before Election Day.

The group also produced buttons to distribute to supporters.

The group, Ready for Hillary, is aiming to build Mrs. Clinton a grass-roots network that would give her a prohibitive edge in any Democratic primary and a significant advantage over potential Republican rivals, channeling enthusiasm for Mrs. Clinton, a former first lady and New York senator, into Facebook hits, Twitter followers and affinity groups around the country.

But the group’s early cash haul and cultivation of a high-powered donor network underscores how presidential campaigns have continued to evolve — and lengthen — in the wake of the Supreme Court’s Citizens United decision.

The donors joining Ready for Hillary’s finance committee are likely to figure prominently in any future campaign fund-raising by Mrs. Clinton or future advertising-oriented “super PACs” backing her. Disclosure reports due to be filed with the Federal Election Commission this week, and provided to The New York Times, will show more than a million dollars raised since the group began fund-raising in earnest this spring.

“One of the purposes is to show what we think is the very broad and deep support for her,” said Harold M. Ickes, a former White House aide who is advising Ready for Hillary. “And if she decides to run, then within the confines of the law, these names and e-mail addresses would be given to the campaign.”

Already, the super PAC is becoming a platform around which veterans of President Obama’s record-breaking campaign-finance operation are jockeying for position within Mrs. Clinton’s future orbit.

Last month, Michael Kempner, a New Jersey public relations executive who was among the top bundlers in the country for Mr. Obama, hosted a prospecting breakfast for the new group.

via A Bet on Clinton – If They Network, She Will Run – NYTimes.com. 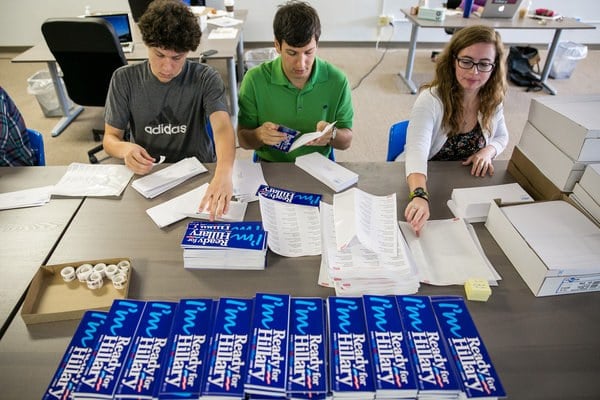