She’s not a presidential candidate yet but Hillary Clinton is already starting to pile up the endorsements.

Missouri Sen. Claire McCaskill Tuesday added her support to a growing roster of Democratic activists pushing the former secretary of state to make another bid for the White House in 2016.  The nudge gives Clinton a marquee, swing-state backer and could be an early glimpse at a major source of support for any potential campaign — Democratic women in the U.S. Senate.

McCaskill announced her support for Clinton on the website of the group “Ready for Hillary,” a super PAC which has looked to build grassroots fervor for a potential Clinton candidacy in 2016.  The group is not tied directly to Clinton but has been aggressive in gathering support for a potential candidacy.

Sen. Claire McCaskill, D-Mo., speaks about pending legislation regarding sexual assaults in the military at a Senate Armed Services Committee on Capitol Hill in Washington, June 4, 2013.

“Hillary Clinton had to give up her political operation while she was making us proud, representing us around the world as an incredible Secretary of State, and that’s why Ready for Hillary is so critical,” McCaskill said in a statement. “It’s important that we start early, building a grassroots army from the ground up, and effectively using the tools of the Internet – all things that President Obama did so successfully – so that if Hillary does decide to run, we’ll be ready to help her win.” 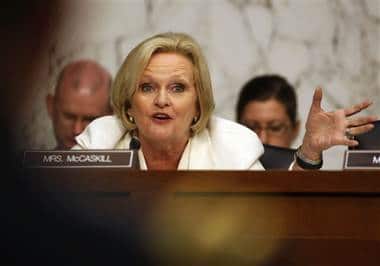