Hillary Clinton Takes the Stage, and the Speculation Heats Up

After a temporary tour as a lieutenant in President Obama’s army, Hillary Rodham Clinton rejoined the Clinton family business on Thursday and went right to work on one of its main objectives: advancing the Clinton brand.Mrs. Clinton appeared alongside her husband, Bill Clinton, in a crowded ballroom here and left little doubt that she planned to reclaim the political stage she exited more than four years ago to become the nation’s top diplomat.At the annual gathering of the foundation established by her husband, Mrs. Clinton delivered a speech that plunged her back into the heart of the conversation about the country’s future, highlighting the need for creating jobs for young people and expanding early childhood development programs.“In too many places in our own country, community institutions are crumbling,” she said, expressing concern about “disconnected young men in our society.”Mrs. Clinton also pledged to continue her work of expanding opportunities for women and girls as she moves into her new role at what has been renamed the Bill, Hillary and Chelsea Clinton Foundation.“This is truly a labor of love for our entire family,” she said.The convention here in downtown Chicago had been billed as the foundation’s effort to bring together leaders from the business, nonprofit and government sectors to discuss ways to revive the nation’s economy.But there was little doubt about the main attraction on Thursday, as speculation in and out of the convention site focused on whether Mrs. Clinton’s appearance was a sign of her interest in running for president in 2016.

via Hillary Clinton Takes the Stage, and the Speculation Heats Up – NYTimes.com. 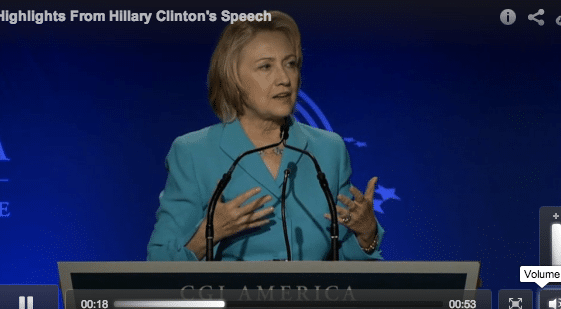