Clintons to stay out of N.Y.C. mayor’s race

By MAGGIE HABERMAN, POLITICO – Bill and Hillary Clinton are making clear they are staying out of the New York City Democratic mayoral primary, just as the race is about to be roiled by the candidacy of their close aide Huma Abedin’s husband, Anthony Weiner.

The pair of stay-on-the-sidelines statements came as Weiner is set to declare his candidacy by video this week, likely on Tuesday or Wednesday. But the statements seem aimed at avoiding the appearance of taking sides in a race that includes the potential first female (and first openly gay) Democratic nominee, a potential second black New York mayor, and Hillary Clinton’s own former Senate campaign manager.

Likewise, Bill Clinton spokesman Matt McKenna said, “President Clinton has too many friends in this race who have been good to him and his family. He wishes them all well, but won’t be getting involved.”

A great deal of attention has been paid to Weiner’s relationship with the Clintons, who have employed Abedin for over 15 years, and who numerous reports pegged as unhappy with the scandal surrounding his resignation.

Hillary Clinton has not spoken out in a political race since leaving the State Department (although there are relatively few this year), and the New York race is taking place a few dozen miles from the couple’s Chappaqua home. Bill Clinton has weighed in on so

via Clintons to stay out of N.Y.C. race – Maggie Haberman – POLITICO.com. 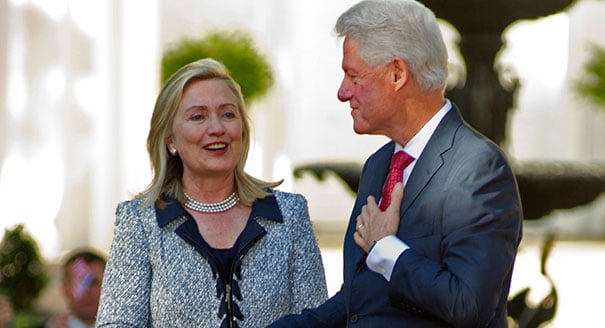