Clinton waiting in the wings, Democratic group paves way for a woman president

By Michael O’Brien, Political Reporter, NBC News– NBC’s Domenico Montanaro talks about the decision made by the Emily’s List group to start a campaign to place a woman in the White House. The group’s efforts include a new ad with an obvious message towards Hillary Clinton.

With former Secretary of State Hillary Clinton waiting in the wings, a prominent Democratic group launched an effort Thursday to pave the way for electing America’s first woman president.

The initiative, dubbed “Madam President,” comes well before the next presidential election has even begun to take shape, but has clear implications for Clinton, Democrats’ favorite right now to carry the party’s banner.

The group EMILY’s List, which supports the political advancement of women, is launching a new campaign to put a woman in the White House. Jess McIntosh discusses.

“There is one name that seems to be getting mentioned more than others,” said Stephanie Schriock, the president of EMILY’s List, which supported Clinton during her 2008 bid for the Democratic nomination. “We do not know if Hillary is going to run — but we’re hopeful that she may.”

So intense is the early interest in Clinton’s potential candidacy that even her most benign public appearances since leaving her job as secretary of state are scrutinized for signals of her intentions. The runner-up in a bitter, drawn-out primary battle versus Barack Obama in 2008, Clinton’s personal approval numbers have never been higher following her stint as the country’s top diplomat.

To that end, a new national poll released separately on Thursday suggested that Clinton is the overwhelming favorite of Democrats in 2016. Sixty-five percent of Democrats said in a Quinnipiac University poll conducted at the end of last month that they would vote for Clinton in a primary; 13 percent would prefer Biden, while all other contenders register less than 5 percent.

Former U.S. Secretary of State Hillary Clinton makes remarks after being honored with a Distinguished Leadership Award from the Atlantic Council in Washington, May 1, 2013.

“This is a wide open race if Sec. Clinton doesn’t decide to do this,” Schricok said, explaining that the EMILY’s List campaign was not focused on any one particular candidate. She challenged pollsters to include other Democratic women among the field of candidates they test.

The essence of Thursday’s new “Madam President” campaign involves preparing Americans to elect any of those women. EMILY’s List said it would launch an online ad campaign with a six-figure price tag to target women on sites like Oprah.com, BlogHer and Feministing — and traditional outlets like the New York Times or New York Magazine.

via Clinton waiting in the wings, Democratic group paves way for a woman president – First Read. 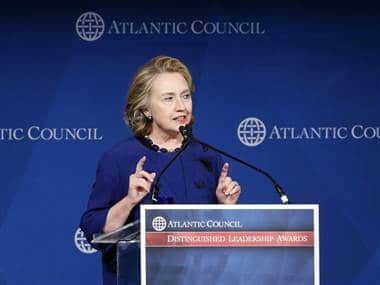