WASHINGTON DC — Name It. Change It., a joint project of The Women’s Media Center and She Should Run, released two new studies today that demonstrate the gender-based challenges women face from the media when they run for office.

Name It. Change It. is a non-partisan media-monitoring and accountability project of The Women’s Media Center and She Should Run, which tracks sexist media coverage of women candidates and public leaders.

In the survey on media coverage of women candidates’ appearance, conducted by Celinda Lake of Lake Research Partners and Robert Carpenter of Chesapeake Beach Consulting, the research used actual quotes about women candidates from media coverage of the 2012 elections and demonstrates that when the media focuses on a woman candidate’s appearance, she pays a price in the polls.  This finding held true whether the coverage of a woman candidate’s appearance was framed positively, negatively or in neutral terms. The second survey, a simulation of the impact of sexism in campaigns, conducted by Celinda Lake of Lake Research Partners and Leslie Sanchez of the Impacto Group, simulated a campaign situation similar to those experienced by real candidates and found that where a woman candidate has already been attacked, sexist coverage further diminishes her vote and the perception that she is qualified.

“Women candidates pay a real price when they are covered in a way that focuses on their appearance,” said Celinda Lake of Lake Research Partners. “Even what we thought was benign coverage about how a woman dresses has a negative impact on her vote and whether voters perceive her as in touch, likeable, confident, effective, and qualified.  And, in close races, sexist coverage on top of the attacks that every candidate faces can make the difference between winning and losing.”

The study has real implications to those in the media who cover women candidates, said Julie Burton of the Women’s Media Center.

“Politics and Style page editors should take note: positive, negative, or neutral media coverage of a woman candidate’s appearance has a detrimental impact on the woman candidate’s race, whether the coverage is on the politics channel or style channel.  When a woman candidate’s looks become part of the election story, she loses ground,” said Burton, President of the Women’s Media Center.  Burton continued, “The press is part of the problem – it may be more fun to focus on a woman’s shoes than her views, but this coverage has a real impact on women candidates.”

This research also has implications for how women who run for office should respond to media sexism.

“As a former candidate, I understand all too well the negative impact that sexism can have on a campaign,” said Siobhan “Sam” Bennett, President/CEO of She Should Run. “Like many women candidates, I was counseled to ignore the sexist attacks that greeted me on a daily basis. That advice could not have been more wrong. The research released today demonstrates beyond the shadow of a doubt the damage sexism can have on a woman’s campaign. That goes for all women, regardless of racial or ethnic background. Today, Name It. Change It. is putting powerful research into the hands of women and men across the country and empowering all of us to stand up to the sexist attacks that keep women from ascending positions of leadership. This important project is just part of She Should Run’s game-changing approach to eliminating the barriers that keep more women from running for office.” 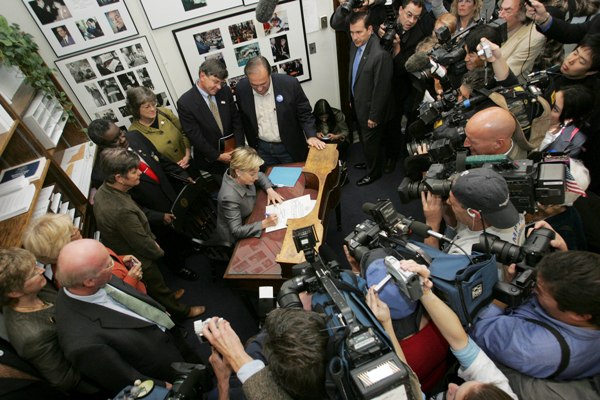