Did the Statement “All Men are Created Equal” Include Women? 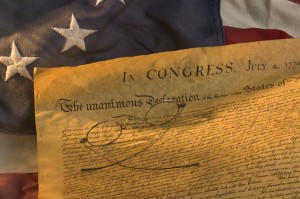 Lighting fireworks this 4th of July, Americans will be paying tribute to the revolutionists and the founding fathers who declared our independence from the British monarchy. When Thomas Jefferson penned, “We hold these truths to be self-evident, that all men are created equal,” did he mean women too?  Could those men have imagined that women would one day indeed have rights of independence?

When Thomas Jefferson and those who helped him draft the Declaration of Independence described a new order among the thirteen colonies of the new United States, they did not include women.  Under the laws of the new United States, women were denied property rights, lacked the ability to vote and could not make or enter into a legal contract.  In colonial America, women were pushed to the sidelines as dependents of men.  Married women were under control of their husbands.

Before and during the Revolutionary War, women played a critical role by boycotting British goods and organizing fundraising activities to support the mission of the patriots.  During the war, many women served as nurses for wounded soldiers.  There were women and girls who took part in militias, serving as spies and even taking over cannons as the enemy approached.  The work done by women was considered unofficial and actual records of women in service do not exist.

The necessity of war allowed for women to participate fully in the development of the new independence.  Following independence, however, social and economic inequality returned and women were once again relegated to household tasks.  The Revolutionary War had little impact on African-American women.  They continued as slaves in every state except Massachusetts.

The seeds of independence had indeed been sown for women following the Revolutionary War.  Movements began to swell, women began to gain education and even attend universities. It was to be another 150 years before women gained the right to vote, but the movement had begun.

“While most women of the Revolutionary Era might not be classed as “feminists” in the modern sense, they were among the first to seriously examine the role of women in American society.”  http://www.historycentral.com