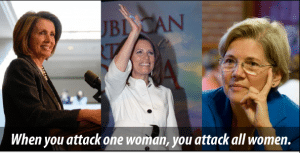 Just in time for this year’s elections, Name It. Change It. has published its women’s candidate guide for dealing with sexist media coverage.  Media sexism is one of the top problems facing women when they run for office and a major deterrent to women considering running. The advice from campaign strategists has typically been to ignore the sexism. “That advice is wrong,” says Name It. Change It. President and CEO, Sam Bennett in a press release.

Just one sexist remark can damage a woman’s campaign. The Name It. Change It. candidate guide aims to equip women candidates, campaign managers, political consultants, and communications staff with the tools to succeed despite sexist comments from media.

As the 2012 election season begins, we have our work cut out for us. Name It. Change It. will not stand by as pundits, radio hosts, bloggers, and journalists damage women’s political futures with misogynistic remarks.

Women are encouraged to share the guide with others and report sexist media coverage tonameitchangeit.org. “Together, we can send the message that a sexist attack against one woman is an attack against all women,” says Bennett.