By Kathy Groob, Publisher ElectWomen Magazine – Political Parity, a nonpartisan initiative of 51 women leaders, held a briefing and roundtable announcing a new national campaign to double the number of women in the U.S. House and Senate and among Governors. 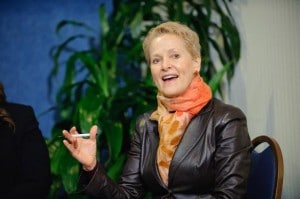 Leading the initiative are former US Ambassador to Austria Swanee Hunt and former Lt. Governor of Massachusetts Kerry Healey.  “The mission of the organization is to double the number of women in Congress and women governors in ten years – by 2022,” says Deputy Director, Taylor Woods-Gauthier.

What began as a conversation among a dozen or so women, has lead to a 51-member leadership organization that is focused on four areas: 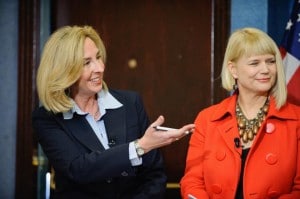 An annual convening of all the leaders was held in December, including women that are the top of their fields, all working towards to the same goal – to elect more women to public office in The United States.  Leadership team members include Sam Bennett of The Women’s Campaign Fund, Tiffany Dufu of The White House Project, Pollster Celinda Lake, Jessica Grounds of WUFPAC, Professor and Author Jennifer Lawless, Karen Middleton of Emerge America and CAWP Director Debbie Walsh.  Click here to view the full list of leaders.

For more information, visit the Political Parity website at: http://www.politicalparity.org