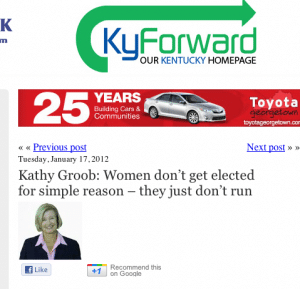 “Gender gap in political ambition is virtually the same as it was a decade ago.”

By Kathy Groob, KyForward contributor – It’s not just Kentucky. With just 17% of the members of Congress representing the female gender, the United States has a systemic problem—there aren’t enough women serving in elected office. More than 50 countries rank higher than the United States in women’s elected representation; we come in at 91st place. In Kentucky where women represent 53 percent of the voting population, women are just 18 percent of the members of the General Assembly.

Universities, organizations and individual foundations such as The Barbara Lee Family Foundation have spent thousands of dollars and beaucoup hours studying the reasons why the United States just can’t seem to make significant progress with getting women to run for office.

Associate Professor of Government at American University, Jennifer Lawless and her partner, Richard Fox of Loyola Marymount University have published a new report that concludes “when women run for office, regardless of the position they seek, they are just as likely as their male counterparts to win their races.”

So what’s the problem?