How would a female presidential candidate fare if she had Newt’s fidelity problem? 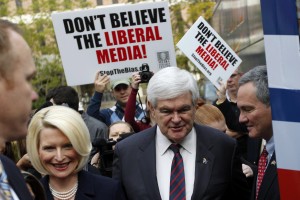 By Kathy Groob, ElectWomen Magazine – Clearly the religious right doesn’t care about the sanctity of marriage as long as it’s between a man and a woman.  When South Carolina Republicans voted overwhelmingly for Newt Gingrich on Saturday, they proved that infidelity and divorce, even multiple times, isn’t enough to keep a candidate out of the White House.  What if the candidate was a woman?

Would a female candidate for president have a chance if she had been married three times?  Had extramarital affairs with much younger men while being married to their husbands?  Would a woman be held to the same lax moral standards that South Carolinians have held for their nominee, Newt Gingrich?

South Carolina’s first woman governor, Nikki Haley, was scrutinized and nearly succumbed to rumors that she had an extramarital affair with a blogger while married to her one and only husband.  “I have been 100 percent faithful to my husband throughout our 13 years of marriage,” said Haley in a statement.  “This claim against me is categorically and totally false,” Haley, a 38-year-old mother of two, said in a statement. “It is quite simply South Carolina politics at its worst.”

So how was it that South Carolina voters so easily dismissed Newt Gingrich’s affairs  and even supported his outrage that his personal life should have no part in the presidential election?  Maybe because the voters are more tolerant of men cheating on their wives than women cheating on their husbands.

Following Saturday’s primary election, New York Times columnist Gail Collins wrote, “South Carolina is probably not the ideal state in which to be accused of breaking the matrimonial bonds, then smashing them and jumping up and down on them until they are a just a pile of marital powdery dust.”

Some in the media have called Newt Gingrich hypocritical for espousing morality in his campaign speeches while carrying the baggage of leaving his two ex-wives while they were dealing with serious medical issues. Gingrich admits to having an affair with a younger staffer during the same time period he was advocating for the impeachment of Bill Clinton for his affair with intern Monica Lewinsky.

Women candidates are held to higher standards by both the media and the voting public.  They are closely scrutinized as to their appearance, parenting choices, work and career and would most likely be penalized for less than traditional personal lifestyle choices.  Especially in a conservative state like South Carolina.