NYC’s most powerful women: how they did it 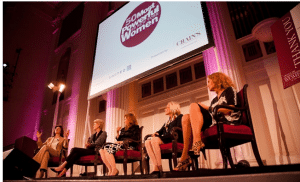 At a Crain’s Lunch, Secrets Were Revealed – Crain’s New York Business – Several of the city’s most powerful women discussed their secrets to success on Monday.

Pamela Brier was told to learn sports analogies; instead she banned them from her meetings after she became chief executive of Maimonides Medical Center.

Jennifer Raab was told not to seek the presidency of Hunter College because she lacked the traditional academic background, but proved the naysayers wrong. She described her quest as “a little bit arrogant, a little bit crazy and pure passion.”

Diane von Furstenberg was told to listen to focus groups. Instead she followed her instincts. “I just have this great relationship with myself,” she said, because she relies on her inner strength for guidance.

the city’s 50 most powerful women, as ranked by the biannual Crain’s list this summer.

Mary Ann Tighe, New York tri-state region chief executive of CB Richard Ellis Inc. and named by Crain’s as the most powerful woman in New York City, moderated the discussion. She asked four panelists about the best and worst advice they ever received as well as their approach to success.

The women detailed the different ways they got to the top.

Long before Emily Rafferty became president of the Metropolitan Museum of Art, she got stuck in an elevator with a Japanese empress she was hosting. Instead of panicking, she struck up conversation. She remembered that she and the empress each studied at Sacred Heart schools. “I did my homework,” she said, and put the empress at ease.

Ms. Rafferty said she was advised to make a career change in order to move up. But she stayed at the Met, where she began with an entry-level position, and rose to the top of the prestigious institution, which has a $220 million operating budget and more than 5 million annual visitors.

The best advice given to Ms. Raab was to not “see the small things as bigger than they are. Let things go.”

Ms. Brier said car analogies—“we’re a Lexus, but we want to be a BMW”—are men’s second favorite behind sports metaphors. But she rejected them as being necessary to compete in the world. Ms. Tighe chimed in that she once gained a measure of payback by peppering a presentation with make-up analogies, bewildering every man in the room.

Families also played an important role. Ms. von Furstenberg said, “My mother taught me that fear was not an option.” Ms. Raab said, “I come from a tough group of broads.”

Ms. von Furstenberg described her fast ascent in the fashion world. But selling her company was something of a let-down. “I felt like such a has-been,” she said. “The second career was to show people it wasn’t an accident the first time around.”

Mistakes are inevitable. “We all eat humble pies,” she said. “And they don’t taste good.” But learn from them, she said. “The first time around I had a man in a suit as president,” Ms. von Furstenberg said. “I’ll never make that mistake again.”

Ms. Raab recalled the beating she took in the press upon becoming Hunter College’s president. Articles would leave the impression she was unqualified, then mention at the very bottom that she held three Ivy League degrees.

Two people on the dais mentioned that getting more education is not always the right choice. Ms. Rafferty said she stayed at the Met rather than going back to school, because she was already in the place she wanted to be and believed she could advance without the diversion of collecting degrees.

Mary Ann Tighe seconded the notion, pointing out that women can learn on the job: “What does every woman say? ‘I need to go back to school to learn that.’ Why?”

She also pointed out the importance of being able to delegate. “The first impulse of most women is to do the task yourself,” she said, calling that an impediment to rising to the top levels of management.

Ms. Brier said she was “terrified” that she wouldn’t know what to do when she became CEO of Jacobi Medical Center in 1989, so she spent her first days on the job shaking the hands of the hospital’s 4,000 employees. Then she noticed that the building lacked signs telling the public how to find the executive offices. Others at Jacobi frowned on the idea, saying signs would primarily attract people with gripes.

“Why do you want to see them if they’re complaining?” she was asked. “Because they might have something to say,” Ms. Brier responded. “And by the way, those signs will be going up.”

“It was at that moment,” she said, “that I knew I was on my way to being in charge.”

Erik Engquist contributed to this article.

Clarification: Emily Rafferty and an empress each studied at Sacred Heart schools. That fact was not clear in an earlier version of this article, published Sept. 19, 2011.