Mission 2012: Elect More Women than ever in South Carolina 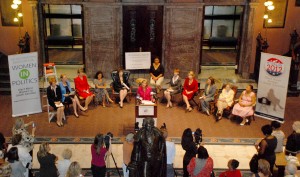 September 7, 2011 – Columbia, S.C. – Women of all ages and races gathered at the South Carolina State House in a call to action for women to “Take Your Seat” and run for elected office at all levels of government during the 2012 election cycle.

“I’d like to thank the Southeastern Institute for Women in Politics (SEIWIP) and the coalition of other organizations who have come together for their work,” said Governor Nikki Haley.”  South Carolina ranks lowest in the country in women serving in office because women don’t run, and that has to change.”

“Women bring unique perspectives to public policy decisions.  We are business executives and educators but we are also moms and wives,” said moderator Heather Hoopes Matthews, Director of Strategic Initiatives for Nexsen Pruet.  “We have sat in the folding chairs at soccer games, the teeny chairs in parent-teacher conferences and at the kitchen table, and now the time is ripe to take a political seat.”

The coalition gathered today to draw attention to progress made and progress desired in areas important to women and to all South Carolinians.  The agenda focused on four key items: a safe and healthy environment, educational opportunities for 21st century jobs, economic autonomy and political participation.

Speakers outlined a broad women’s agenda and then brought up key points specific to their areas of expertise that will need to be addressed in the coming years and impact our state for generations.  Ginny Waller, Executive Director of Sexual Trauma Services of the Midlands spoke about freedom from violence and Debbie Billings, SC Healthy Families spoke about proactive health and access to it.

“State leaders like attorneys general Henry McMaster and Alan Wilson have recognized that sexual and domestic violence is not just a woman’s issue, it is a community issue,” said Waller.  “With focus from these and other forward thinking leaders, as well as electing more women in public office, S.C. can ultimately end violence against women.”

“An absolute starting point for any woman in S.C. to fully claim her place at the table as a productive member of her community, is good health, for both herself and her family,” said Billings.

“Encouraging successful women-owned businesses to expand is an important goal for S.C.,” said Whitson.  “Efforts like Make Mine a Million and the Women President’s Organization (WPO) are designed to do that and we hope to start chapters of WPO around the state in 2012 to bring women CEO’s in growth businesses together to expand their business impact.” 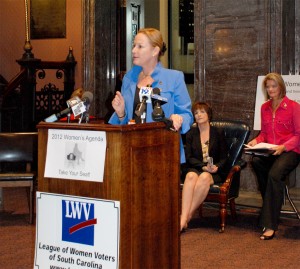 The press conference closed with a call to action regarding political participation by Candy Y. Waites, former member of SC House of Representatives, and executive director of S.C. Gubernatorial Appointments Project, Sara Leverette, League of Women Voters of S.C., The Honorable Jenny A. Horne and Mary Anne Jacobs, Senior Director Government Relations for Time Warner Cable and SEIWIP Board Member.

“Women must continue to step up to the table,” said Waites.  “And we must also work to guarantee that women occupy seats at the table.”

“We currently lack the diverse perspectives of women in public office and are calling on women to step forward to run and take their seats,” said Jacobs.  “2012 offers a unique opportunity to begin fixing the gender discrepancy at the policy-making table and the SEIWIP is working in conjunction with groups across the State to find candidates and train them to win.”

South Carolina ranks last in the nation in terms of women in public office.  There are only 16 women currently serving in the S.C. House of Representatives and no women in the Senate.  South Carolina has the dubious distinction of being the only state in the nation with a single-gender chamber.

If you, or a women you know is interested in running for office, contact the SEIWIP by email at [email protected] or phone at 803.741.5644.  You can also find out more information about Mission 2012 and the SEIWIP at www.scelectswomen.com.

The Southeastern Institute for Women in Politics is a non-profit organization registered with the State of South Carolina. It is the only 501(c)(3) in the Southeast that is certified by the Internal Revenue Service to encourage and train women to run for office and become more deeply involved in politics.  Contributions to the Institute are tax-deductible. For more information, visit www.scelectswomen.com.