No longer a disadvantage to being a women candidate 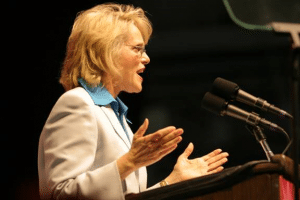 Research shows 2010 was a turning point for women candidates

When Barbara Lee began her research to study the relationship between gender and campaigns for women governors, it was 1998 and there was clear data showing that female candidates held a distinct disadvantage.  Not so now, says Barbara Lee, after studying women’s gubernatorial campaigns for 12 years.  She now believes 2010 was a turning point.

The Barbara Lee Family Foundation along with pollster and political strategist, Celinda Lake, have been tracking trends and data for women candidates for governor and saw marked differences in the 2010 results.  “Women candidates in 2010 ran on a more level playing field than in past years,” said Barbara Lee Foundation founder and president, Barbara Lee. 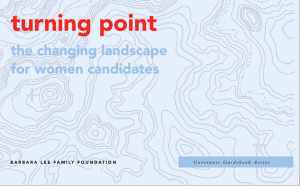 Titled Turning Point, the changing landscape for women candidates, the Barbara Lee report showed that gender disadvantages women experienced in the past are fading. Being viewed favorably, honestly, ethically are now more important to the voters than a candidate’s gender the study found.  “Women still face barriers, but they also showed distinct advantages of their male counterparts,” said Lee.

The Turning Point report offers point-by-point analyses of the findings as well as recommendations for women candidates.  Female candidates can use their well-rounded business and life experiences, and their “ability to use everything”, to their advantage.  Women are now perceived as “tough enough” as problem-solvers, crisis handlers, and having an advantage when it comes to honesty.

While women candidates enter the next election cycle with a stronger gender position, challenges still occur with respect to recruiting women to run and development of their skills needed to become effective candidates.  “Now more than ever, gender may be a strategic asset in women’s campaigns for executive office,” said Barbara Lee.