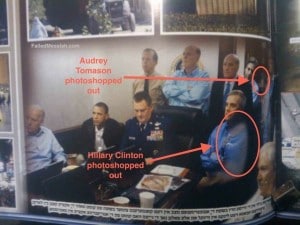 Der Tzeitung, the ultra-Orthodox Hasidic Jewish newspaper that photoshopped Secretary of State Hillary Clinton out of that historic bin Laden-killing Situation Room photo, has formally apologized to the White House and the State Department for disappearing Clinton. But another Hasidic publication is now in hot water for pulling the same stunt. Failed Messiah reports that De Voch, a glossy Brooklyn-based magazine that means “The Week” in Yiddish, airbrushed Clinton and Director for Counterterrorism Audrey Tomason from a color photo in the publication.

De Voch’s photoshop job is pretty amateurish—Clinton is transformed into a dark shadow and a gravy stain on Deputy National Security Advisor Denis McDonough’s sleeve—but at least no Orthodox Jews will be led astray by her lusty Siren call. De Voch hasn’t commented on the photo yet, but Der Tzeitung issued a lengthy statement yesterday apologizing and objecting to the insinuation that the women were removed because some Orthodox Jews object to women occupying positions of power:

The White House released a picture showing the President following “live” the events in the apprehension of Osama Bin Laden, last week Sunday. Also present in the Situation Room were various high-ranking government and military officials. Our photo editor realized the significance of this historic moment, and published the picture, but in his haste he did not read the “fine print” that accompanied the picture, forbidding any changes. We should not have published the altered picture, and we have conveyed our regrets and apologies to the White House and to the State Department.The allegations that religious Jews denigrate women or do not respect women in public office, is a malicious slander and libel. The current Secretary of State, the Honorable Hillary R. Clinton, was a Senator representing New York State with great distinction 8 years. She won overwhelming majorities in the Orthodox Jewish communities in her initial campaign in ‘00, and when she was re-elected in ‘06, because the religious community appreciated her unique capabilities and compassion to all communities. The Jewish religion does not allow for discrimination based on gender, race, etc.

We respect all government officials. We even have special prayers for the welfare of our Government and the government leaders, and there is no mention of gender in such prayers.

All Government employees are sworn into office, promising adherence to the Constitution, and our Constitution attests to our greatness as a nation that is a light beacon to the entire world. The First Amendment to the Constitution guarantees freedom of religion. That has precedence even to our cherished freedom of the press! In accord with our religious beliefs, we do not publish photos of women, which in no way relegates them to a lower status.

Publishing a newspaper is a big responsibility, and our policies are guided by a Rabbinical Board. Because of laws of modesty, we are not allowed to publish pictures of women, and we regret if this gives an impression of disparaging to women, which is certainly never our intention. We apologize if this was seen as offensive.

We are proud Americans of the Jewish faith, and there is no conflict in that, and we will with the help of the Almighty continue as law-abiding citizens, in this great country of our’s [sic], until the ultimate redemption.

That last bit is key: they’ll follow the law until the Messiah comes, and then all bets are off, because that’s when the Temple gets rebuilt and Jewish law becomes the law of the land. And when that day comes Hillary Clinton’s seductive image will no longer be allowed to burn itself into our defenseless retinas! [Via Daily Politics]