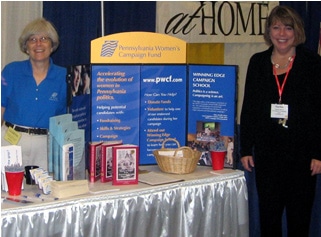 Twenty-seven years ago the political landscape for women was abuzz with hot button issues. The women who founded the Pennsylvania Women’s Campaign Fund (PWCF) were determined to raise money for women candidates of all political parties who would carry out their principles of equality embodied in the ERA, were pro-choice, and progressive on other social issues.

The organization celebrated their 25th anniversary two years ago and is dedicated to continuing their tradition of being involved in every campaign cycle since 1982.   “We still do not have enough women in the pipeline in Pennsylvania and not many win, “ said Martha Harris, one of the founding mothers of PWCF.  “It’s still a real challenge to grow the percentage of women in office and we’ve made only modest gains.  We started at 4% in 1982 and now are at about 15% of women serving in the state legislature.  We still have a long way to go.”

The organization is non-partisan and supports women from both sides of the political aisle.  “Electing more progressive women to decision making positions should not be a partisan issue,” said Martha Harris.  Democratic women are often seen as more progressive, but in fact, the first PWCF endorsed candidate was a Republican woman in 1982.

The partisan issue is not without controversy. Nancy Neuman, Former PWCF President writes this “Republican Alma Jacobs, a founding board member, learned that first hand when nine Republican women in the House accused her of disloyalty. According to the Delaware Times of March 19, 1982, Jacobs was the “center of a growing storm…because she is on the board of the new PWCF [which] has endorsed two Democrats and a challenger to Republican incumbent Representative Steven Friend.”

In recent years, the organization has focused on training women to run for office.  Earlier this year they sponsored The Winning Edge Campaign School for women at Chatham University in Pittsburgh.  The same program will be held in Philadelphia in September.  “Training at the local level is important to get the awareness and motivation going and to give women the tools at the local level,” said President-elect, Jennifer Reiner.  “We plan to expand beyond our Pittsburgh base and provide training in both Philadelphia and Harrisburg.”

“We are stepping up trainings by getting out into different regions and enhancing the three-day training and fundraising,” said President Beth Zamponga. “We have to identify and ask women to run – step up the recruitment efforts.  We need to get more women in the field running.”

“Our key word is proactive – we are being strategic with our efforts and we know the state house is up for grabs,” said Beth Zamponga.  “PCFW is really trying to raise as much money as we can during this off year, and about building critical mass – that’s what it’s really all about.”

To contribute or for more information about the Pennsylvania Women’s Campaign Fund, visit: http://pawcf.org/.