A True Kentucky Pioneer: The Story of Kentucky’s First Female and African-American Senator 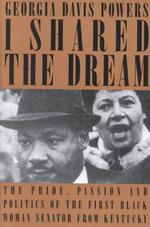 At the time, Georgia Davis Powers had no idea she had made history in 1968 by becoming the first woman AND the first African-American elected to Kentucky’s State Senate. All she knew was that she wanted to make a difference in her community.

It was never her intention to become a politician, or even to work in government, but in the spring of 1962 Powers was introduced to politics upon the suggestion of fellow church member Verna Smith. Upon Ms. Smith’s advice she joined the U.S. Senatorial campaign staff of Wilson Wyatt. This led to six more years of managing mayoral, gubernatorial, and congressional campaigns. She also became heavily involved in the civil rights movement, leading the Allied Organization for Civil Rights in promoting statewide public accommodations and fair employment law in the early 1960’s. In 1964, she was one of the organizers of a march on the capital in Frankfort in support of equity in public accommodations, in which Dr. Martin Luther King and baseball legend Jackie Robinson participated.

In 1964 she was the first black woman elected to the Jefferson County Democratic Exectuive Committee. But after two years she was discouraged by the fact that the Committee had not discussed a single one of her proposals and decided to resign.

In 1966 she worked in the bill room during the Kentucky House of Representatives legislative session. This gave her the opportunity to see first hand how government functioned, as a result her political ambitions grew.

Later that year the Senator from Louisville’s Thirty-third District announced he would be moving out of the district and would therefore be relinquishing his seat. Powers knew this was the opportunity she had been waiting for. In order to win she knew she would have to raise money and organize. She immediately began seeking endorsements from important political leaders and the Teamsters union. In the end she won by a majority of 167 votes.

Upon arriving in the Senate Powers did not know she was the first black, woman or man elected to the Kentucky State Senate. What she did know was that she wanted to introduce bills on civil rights, equal rights, and education as her first orders of business.

Despite her new status as a Senator, Powers still experienced discrimination in Frankfort. Because she was from Louisville it was not possible for her to drive to Frankfort everyday to attend session. Like many other senators she needed to rent a hotel room for her stay during the session. She found the hotels the other Senators were staying at in Frankfort would not rent her a room. This would not be the last time she faced such obstacles.